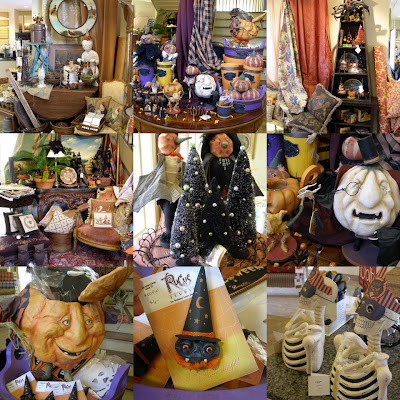 I took some pictures over at BOLT today. I really need to do something about their website. It's hurtin'. But instead of taking good store pics, I got carried away taking pictures of all the cool Halloween stuff we have for sale, and thought it would be fun to share. Both of the owners (sisters-in-law) are insane Halloween nuts, apparently. Halloween has never really been my kind of holiday, but after looking at all this cool stuff, I may be a convert. I am in LOVE with that pumpkin head dude holding his own top down there on the bottom left. Isn't he awesome? I bought one of the little fangy monster pins that I'm holding in the bottom middle for Kathleen. I also bought a little sparkly pumpkin tiara, which I'll have to put on an actual pumpkin so you can see it. I wasn't home when Kathleen opened it, so she calls me and says "Mommy, how am I supposed to wear the tiara? It's got pokey things in the bottom." The kid slays me. I say "It's a PUMPKIN tiara, silly!" and the poor kid says "OOOOooooohhhh!" Heh. I love messing with her. Maybe we'll buy a pumpkin tomorrow. It's getting to be that time, isn't it? Some people ( I won't mention any names...um...PAT) have had their decor going for weeks now. What can I say? Once a late bloomer, always a late bloomer?

We had a busy day today at the store as well, which is great. Things are steadily getting busier, which is very encouraging. Word is really traveling fast. We haven't spent much money on advertising at all. I try to ask everyone how they heard about us, and it's inevitably "my sister, my friend, my mother-in-law"...that kind of thing. I'm still only working two days a week, but I can see that's going to have to change at some point. They won't be able to sustain the skeleton crew mentality much longer. It's getting too busy, and the two of them are working every day. I really don't want to work full time, but I might consider three days. We'll see. (I've still got my own business going.) We have three other part-time employees who are working out well. One of them is a good friend of mine who used to work at JoAnn Fabrics (she also does slipcovers!), the second is a fellow employee from Calico Corners years ago (pretty much the only one I would even consider hiring--sad, but true), and the third is a woman who teaches continuing ed type sewing classes at night who came in months ago and I said "Hey, want a job?" lol. She came two months later--just looking to get out of the house a couple of days a week, and she can work until 6, so she's in! :) She just started last week.

Well, I feel like my weekend starts tomorrow, since I worked today, so happy Columbus Day weekend, y'all. Do something fun, fullfilling, and autumnal!

Please respect my inherent copyright of all pictures and text on my blog. If you'd like to use one of my photos, or reprint any text, please ask my permission first. Thank you!