Hello all! Long time no blog! My apologies. Not only have I been busy, but I really haven't felt much like blogging of late. Now that winter is settling in, though, I'll probably hop back on the blog train. Don't hold your breath though.
December 5th was this year's Christmas by the River event in Coxsackie, and I had a great time preparing for it this year. I did lots of crafting, which is one of my favorite things to do! I've seen these vintage book page wreaths all over blog land, so I decided to try my hand at them, and this is how mine came out: 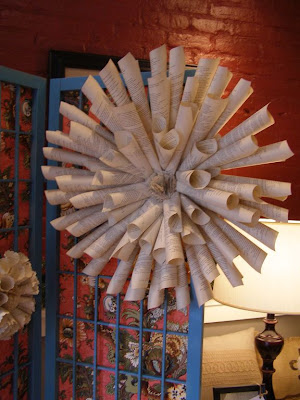 The big one was over 24" in diameter, and the small one below was about 12" in diameter. They were a big hit. Everyone kept saying "Oh, how clever! I should try that!" Which, of course, is what I always say when I see a craft that I could TOTALLY do, so I won't pay someone else for it...lol. Between a trunk show I had last weekend, and Christmas by the River, though, I sold two big wreaths, and four small ones. I could have sold more small ones, so next year I'll probably make more of those. 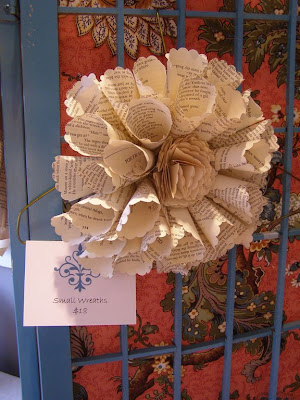 I was in a new space this year--the Town Offices building, and I really liked it. The brick walls and wainscoting were great and fit in with my aesthetic. If all goes as planned, I'll be in the same spot next year. 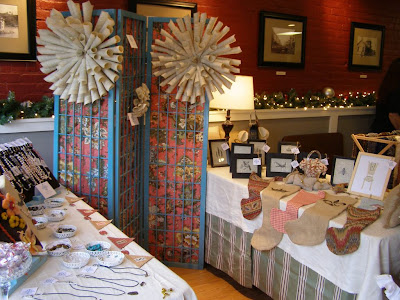 I made up a bunch of linen pillows, which I am in love with--which is a good thing, because I only sold one of them! BF told me I should have made them in matching pairs. I just think that this was the wrong venue for pillows. So...live and learn. The good news is, they all look great in MY house, so LUCKY ME! Hee! 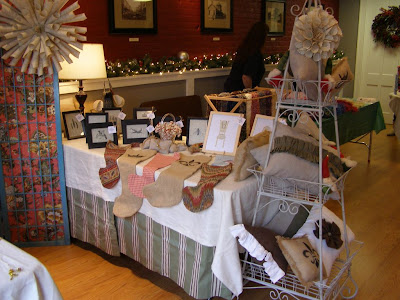 I made up some felted wool flower necklaces, which I thought were adorable. I sold a few of those, but they were not as popular as I thought they might be. A lot of people liked them, but not many were willing to wear them. C'est la vie. Another lesson learned! 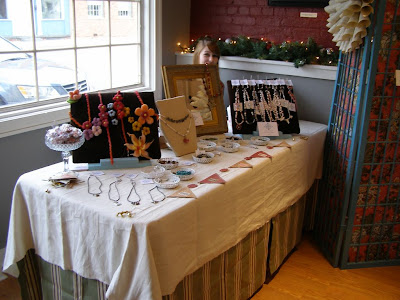 Aren't they cute though?: 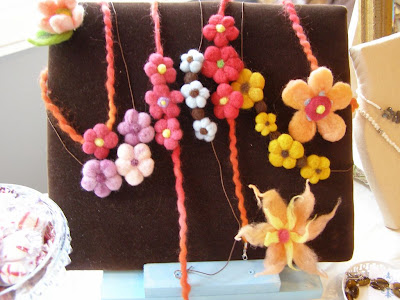 I also had some fun with Photoshop and vintage pages from an encyclopedia. I only sold one of these. Again, I think I just need to know my audience, and only the young ladies appreciated these. I think they're awesome, and of course they will look fantastic in my house! Ha! 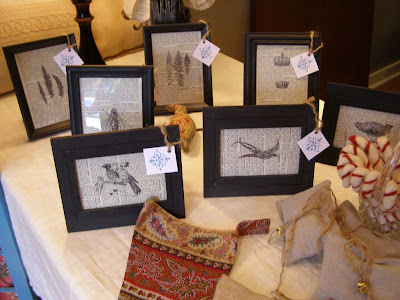 The stockings and the burlap pillows are gone, as well as all of the felted wool candy canes there in the glass basket. Those sold very well. I wish I had gotten a better picture of them. 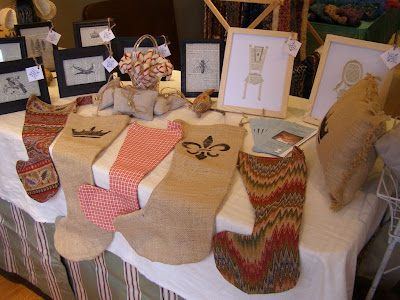 Again, me and my crafty self, cutting up old books and turning them into chair art. Me likey! 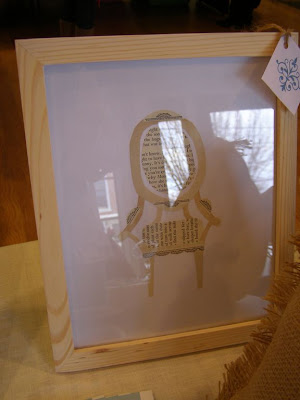 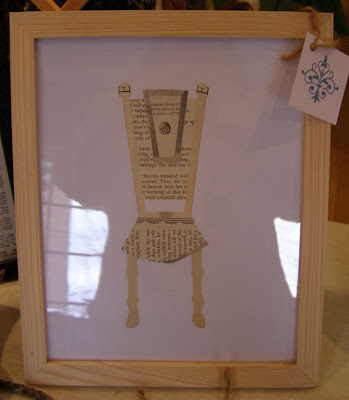 There's the lovely Kathleen, helping me out for the day. ♥ Oh, and check out my little needle felted santas in with the pillows on the tower. I sold all of those. They were too cute! (Click the pics to view them larger.) 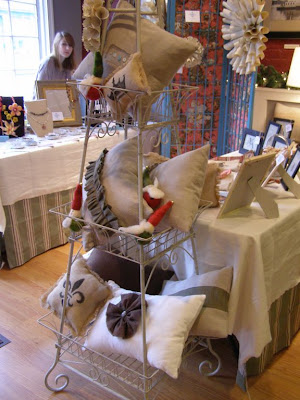 I didn't make much in the way of new jewelry this year, because I was too busy crafting all the other stuff! Next year I think I'm going to head in a different direction with the jewelry--a little more dainty, with more silver chain involved. What I had, did sell well though, so I'm happy. 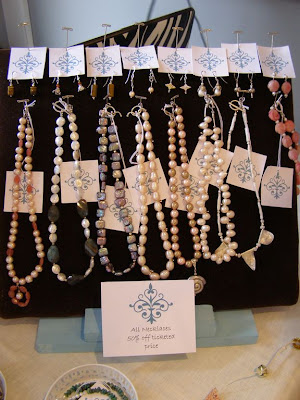 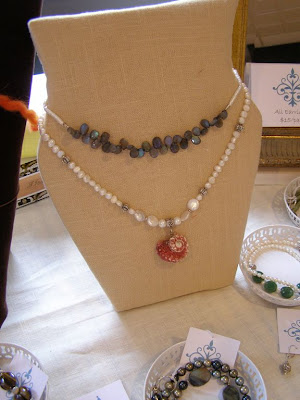 The vintage lace on this pillow was given to me more than ten years ago by my friend Kelly in a big box of vintage trims. Isn't it pretty? 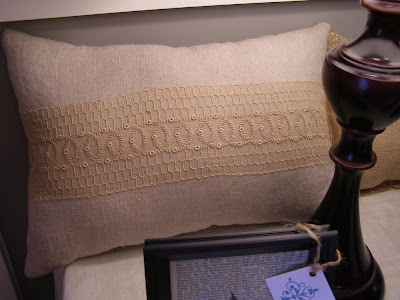 As you can see, I have once again updated my blog background. I wanted it to be wintery. Of course, now that I see it all up and in my face, it looks kind of dreary, so it may change yet again soon! Thanks for stopping by after my hiatus. I'll try not to stay away so long next time.
If you're local, come to Proctor's this weekend for the Melodies of Christmas. All of the net proceeds benefit the Melodies Center for Childhood Cancer and Blood Disorders at the Children's Hospital at Albany Medical Center. My darling daughter will be singing in the Empire State Youth Chorale. If you can't come to the show, they play it on TV (CBS) on Christmas Eve and Christmas Day as well. Look for her smiling face!

Wow! You have been busy.
Those wreaths are cute. I haven't seen them before. Are they difficult to make?
I keep thinking I need to make some stuff for our tiny town's craft show in Nov. Seems the crafters all make the same stuff. It's rather boring. (in my mind!)
I love what you did. Those stockings and pillows are adorable.

Talk about NOT putting all your eggs in one basket, you smart cookie. Love the variety of items you had, Sharon. When I worked retail for 8 years, I learned that's it's impossible to predict what people will buy. One day, everyone's in love with one thing, the next day it's something else. The pillows are awesome! Did you get a feeling for the resistance? Price, fabric, style? I'm allergic to wool, for example. Adore the little Santas! And the chair art is very cool!

Merry Christmas, Sharon! You've been crafting up a storm. Some pretty things there. Those wreaths have been a big hit this year. I didn't try one of them. Hope you have a wonderful Holiday season & Happy New Year too!

Sharona! Got your FB note & just read your comment & I'm laughing at you running out buying all the stuff for this. I'm tellin ya, it's a keeper. Wait til you taste all that good stuff on the bread. I think it would be perfect for a party too, cut up in smaller slices. My hubby LOVED it! Definitely man food too.

Please respect my inherent copyright of all pictures and text on my blog. If you'd like to use one of my photos, or reprint any text, please ask my permission first. Thank you!